The story behind Pahoehoe Lava Flow 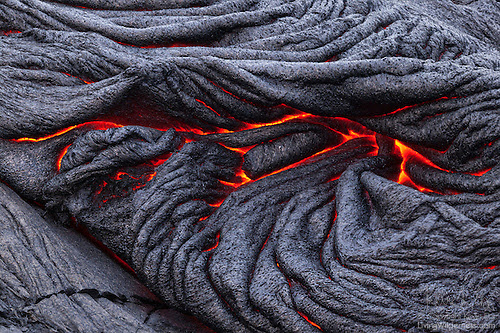 In most national parks, geology is a history lesson. You see a feature of the land and must work to visualize the progression of forces that formed it. In Hawai`i Volcanoes National Park, however, the land changes before your eyes.

Kīlauea, one of two volcanoes, has been erupting continuously for more than 30 years. While the eruption is violent at times, more often the lava here flows like toothpaste being squeezed from a tube.

Standing a few arm’s lengths from lava is truly one of the highlights of my experiences as a nature photographer, but the opportunity came after a long, miserable hike.

Every year, the lava flow is farther and farther from the end of the road. The hike begins where the lava flowed over and blocked the road in the mid-1980s. For the first mile or so, occasional yellow markers glued to the lava mark the path. Then there’s just lava.

With steam rising on the horizon, you can see where you want to end up. You just don’t have any way of telling how far away that is. Nothing grows here. There are no clues to give you a sense of the scale.

And the hike itself is difficult. After you’re past the end of the markers, there is no official trail. The ground is uneven. You have to watch where you’re stepping to avoid twisting your ankle. Sometimes to have to stop and strategize the safest, easiest way to climb up or delicately step down remnants of a particularly odd flow.

It took several hours, but about a half hour before sunset, I ended at a bluff where lava was flowing into the Pacific Ocean. It was gorgeous. Molten rock flowed like water in a waterfall. Occasionally, large ocean waves seemed as if they were trying to shove the lava back into the opening in the bluff.

My plan was to wait until sunset to capture the lava flow into the ocean. I thought the intensity and color of the sky then would better balance with the scene. But another opportunity presented itself.

While sitting on the bluff, my seat began to warm up. It was gradual, like turning on the burner of a stove. I got up, stood back, and slowly watched the flat surface bubble up like a dome. It stretched, then popped. Lava oozed out.

I trained my short telephoto lens on places on the rock where new emerging lava created interesting patterns. Sometimes it made a tiny river, but I was more interested in the times when the rock stretched, letting me view the glowing lava through the newly-formed holes.

There are a few types of lava, and this rope-like kind is called pahoehoe. It is the hottest — and therefore most liquid. As it pours over the landscape, it cools slowly, solidifying into relatively smooth shapes. (The other primary type of lava is aa. It’s more explosive and cools more rapidly, so it’s much more ragged.)

The flow depicted here built up a new bluff overlooking the Pacific. But even as I photographed this scene, I could see that more lava was flowing beneath it and into the ocean, undercutting the bluff. As I hiked back to my car, I wondered how long that bluff would last.

In most national parks, scenes take thousands — if not millions — of years to develop. In Volcanoes National Park, the scene can be dramatically different within just a few minutes.

(This image is on display through March 18, 2017 as part of the National Parks of Alaska and Hawaii exhibit at the G2 Gallery in Venice, California. It is also featured in Kevin Ebi’s book, Our Land, which celebrates the land protected by the U.S. National Park Service.)