The legend of Haleakalā 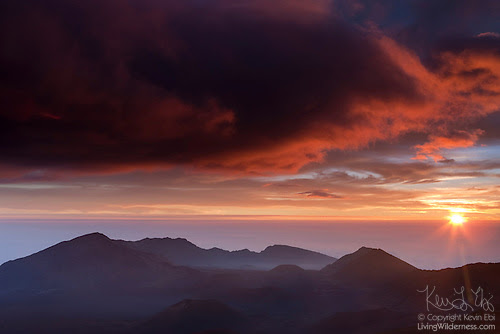 Do you enjoy the long days of summer? Summer days used to be short. There was a time when night was longer than day year round.

Maui was the one who finally got us longer days. But to do that, he first had to catch the sun.

It all began out of the frustration of Maui’s mother, Hina. She made kapa, a beautiful fabric that was made up of colorful strips of bark from wauke and mamaki trees. Each morning at sunrise, she would set out her freshly dyed strips of bark. Each night at sunset, she discovered they were still wet.

One day Maui sat out with the bark to try to figure out what was wrong. The problem was immediately obvious. The sun raced across the sky as fast as he could. There was no time for the bark to dry; the sun wasn’t in the sky long enough.

Maui climbed more than 10,000 feet to the summit of Haleakalā, where the sun slept in the mountain’s crater.  As soon as the sun awoke and the first rays of sunlight appeared over the crater rim, Maui tied up the sun and refused to let him move.

“I want you to move much more slowly across the sky,” Maui replied, “and I’m not going to let you go until you promise that you will.”

They bargained for a while, eventually reaching a compromise. For six months of each year, the sun promised to do exactly what Maui asked. For the rest, the sun could sail across the sky as fast as he wanted.

Hina was pleased with the deal. She made a cape for Maui and it was dry by afternoon.

And in honor of the deal, each morning at the Haleakalā crater, the sunrise is one of the most stunning on Earth.

— Based on a Hawaiian legend

Thanks for the aloha on this wet and windy day.

Mahalo, Split Pea Traveler! I'm glad you enjoyed it. It's one of my favorite stories and images from the project.

been a lot of great shots
Good luck