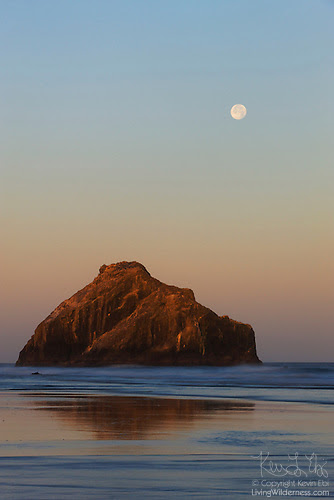 It wasn’t safe, she was told. Those alluring blue waters were home to Seatco — the evil spirit of the ocean.

Just as Ewauna was the epitome of adventurous, Seatco was the epitome of evil. For fun he spawned severe storms that ravaged the coast, throwing logs and debris as far and as hard as he could. The local tribe relied on the ocean for food and could only send men out to fish when Seatco wasn’t looking. If he saw them he would sink their boats and create powerful waves that would consume them whole.

Ewauna would have none of that. She had to see the ocean. She promised herself that she would be careful.

After the big feast, as everyone slept, stomachs full, she quietly slipped out. The bright full moon guided her through the darkness to a bluff that overlooked the ocean. The crashing waves sounded more peaceful than ferocious, so she climbed down and ventured closer.

Soon she was close enough that she felt the water splashing over her toes. And then she felt a powerful arm that was trying to drag her in.

As she jerked back, she lost her grip on the basket of kittens she had brought with her. They were her pets and they provided comfort. Seatco used his other giant hand to bat the basket out to sea. The kittens were immediately turned to stone, their heads visible above the water.

Unable to run, Ewauna knew all she could do was avoid Seatco’s gaze. That’s how he got his power. She focused her eyes on the full moon.

Eventually she, too, was turned to stone. Her father awoke at first light and saw that she was missing. He immediately headed to the ocean where he found her, still staring at the moon.

— Adapted from a Coquille tribal legend