The most colorful show on Earth 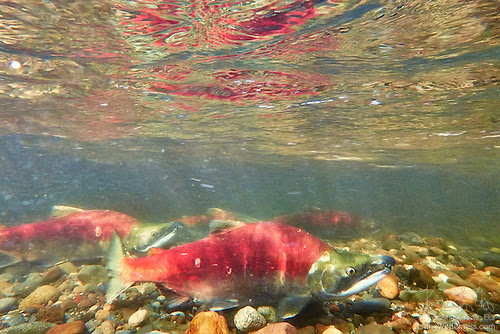 As the leaves along the Cedar River in Washington state turn from green to yellow, gold, orange, and red, people walking along the river's banks may not notice there's an equally colorful display just under the water's surface. As the leaves change color, so, too, do the sockeye salmon returning to the river after spending the past couple years at sea.

Sockeye salmon are also known as red salmon, although for the vast majority of their lives they're actually bluish-silver. Like most salmon, they're anadromous: They hatch in freshwater, spend part of their lives in salt water, and return home to mate.

It's that return migration that turns their bodies bright red and their heads green. The change begins once they hit freshwater. 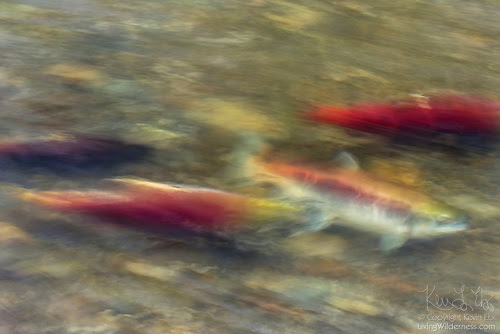 When they lose their bluish coloration, they also lose their appetites. They eat their last meals in the ocean. They won't feed ever again once they hit freshwater, even though it may take months to fight their way up the river to the lake where they hatched.

At this point, their oversized, misshapen, toothy mouths, which they likely can no longer entirely close, are for efficient fighting. They have to conserve all of their energy for their migration and for winning and guarding a mate or nesting location.

While I photographed the sockeye salmon, I witnessed several fights. They were over in a matter of seconds. If one fish felt it needed to attack, it would quickly chomp down on another's back, hold for a few seconds, then let go. 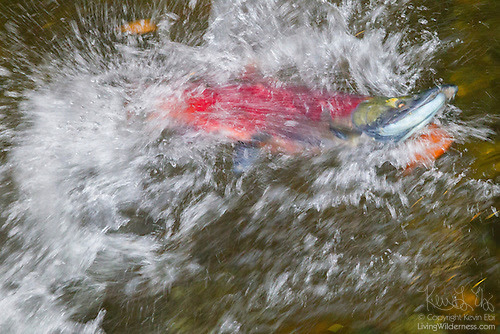 I never saw a fight last longer than that, since fighting at this stage of their lives requires a cost-benefit analysis. If they expend too much energy fighting one battle, they still may end up losing if they don't have enough strength left to continue up the river to find a mate and spawn.

Sockeye salmon are known to be very aggressive at their nesting sites, but during the migration there, they largely appear to tolerate each other. After one fought its way up a small cascade in the river, it would join a half-dozen or so others, resting, regaining their strength to fight their way up the next one.

By the time the leaves have fallen, the sockeye salmon will have reached their lakes and mated. They die shortly after mating, triggering another migration: Bald eagles migrate from thousands of miles away to feed on their carcasses.

As I photograph the fish in the water, I hear a few bald eagles. Within a few weeks, there will be hundreds more, creating the next amazing display.