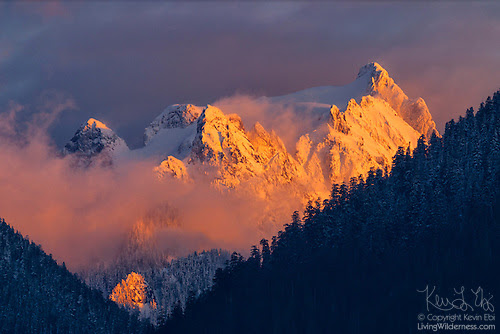 The Wilderness Act, which has preserved some of the most pristine areas of the United States, turns 50 next week. My absolute passion for nature photography has just turned 14.

The two are more related than they might seem.

The Wilderness Act is based on the idea that some land is so valuable, we should do absolutely nothing to it. We won’t build hotels on it. Or homes or offices. Or even roads.

But in the process of doing nothing, we’ve actually done a lot. We’ve created something special.

Growing up, art was one of my least favorite subjects. Art was about painting, drawing, cutting, and gluing, and I was terrible at it. I honestly would have rather spent more time doing math.

Fast forward several decades. I have a degree in economics and journalism. I have a so-called good job in a big city. But every job is stressful, and to blow off steam I start hiking after I get off work.

I often end up in the Alpine Lakes Wilderness, a giant reserve made up of more than 700 mountain lakes and ponds in the Central Cascades of Washington state. A busy interstate takes you right to it, but after a few minutes on the trail you forget it’s even there.

A funny thing happens when you’re surrounded by nothing: You notice everything.

With no manmade features to distract, all you can do is take in the incredible beauty of ragged mountains reflecting in still lakes. Or notice a spot where a small river carved a slide into a bolder. Or see how the patterns in the tree bark kind of look like an impressionist painting.

This heightened sense of awareness didn’t dissipate the moment I hopped back into my car at the end of a hike. The Alpine Lakes caused me to be more in tune with the world around me and I began to notice interesting features even in busy city parks.

I was no stranger to nature. Growing up, my family made frequent trips to national parks and monuments. But at least the areas that are relatively easy to access are like small cities themselves with visitor centers, stores, and traffic jams. The Alpine Lakes, however, was different. Many parts are easy to access, but it’s quiet.

The result was that I wanted to capture my experiences and share the wonder with others. I found something I was incredibly passionate about, and I wanted to create images so others could see what I saw and felt — and inspire them to care about it, too.

When you think about it, that’s all art really is. I just didn’t realize that until I found something I was so passionate about and could be in a place where I could hear myself think.

Early this year, I was asked to join 10 of the top landscape photographers in the country for a special exhibit to honor the anniversary of the Wilderness Act. Each of us were invited to provide four framed prints for the exhibit. The only requirements were that the images had to be from federally-designated wilderness areas and the prints have to be huge. We want people who step up to view our work to almost feel like they’re being pulled into the scene.

Without the Wilderness Act, there’s a chance the four images I’m exhibiting wouldn’t exist. The Wilderness Act prevented them from being destroyed before I photographed them. And it’s preserved them in their same state since.

But, for me, the Wilderness Act also goes beyond that. If not for it, there’s a chance that none of my images would exist.

Beautiful essay, and congratulations for being selected as a top 10 wilderness photographer. In looking at your pictures, I see why you were chosen.