You get what you get 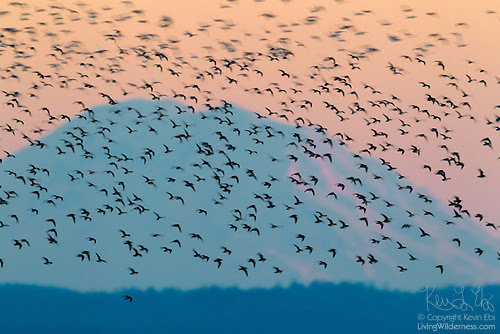 My style is typically to create images that tell stories, whether it's about the changes of the seasons, the behavior of the wildlife, or some other natural phenomenon. Planning helps be focus my message and to tell the story the best way possible.

Despite all the planning I do, however, I would guess that a majority of my best images involve some serendipity. Planning can also be a creative trap.

On this particular day, I headed up to the Skagit Valley of Washington state with the purpose of trying to capture snow geese with a giant snow-capped volcano in the background. Snow geese visit the state only for a few months each winter. I figured the snowy mountain would effectively communicate the season. The forecast called for clear skies, so I figured it was my day.

When I arrived, however, clouds were already building around Mount Baker. And the snow geese, which frequently travel in one giant flock, were dispersed because of hunters. There were groups of the birds here and there, but the size of the flocks was nothing compared to what I've seen in the valley on previous trips.

Over the years, I've learned that while having a plan is important, it's even more important that you know when to try something else. So that's what I did.

I went for a short hike along an open area along Skagit Bay and saw a large flock of sandpipers feeding on the mudflats. The flock grew larger and larger. A bald eagle flew by and stirred them up. Soon thousands of these shorebirds were zig-zagging across the water.

I spent a half hour photographing them as the flock grew ever larger while the sun set behind the Olympics. In several of the frames, I got a different volcano, Mount Rainier, in the background. If I had stuck with the plan, trying to force an image that nature wasn't willing to provide that day, I would have come home with nothing.

This experience wasn't unique. On my first trip to Iceland, for example, I traveled with a stack of research and ended up using very little of it because of unusual weather. I spent that trip making lots of close-up and patterns images instead of the sweeping landscapes I envisioned. And I'm proud of the images I created on that trip.

I think one of the biggest success factors for a nature photographer is understanding the roll of planning. Planning opens your eyes to the opportunities. Once you're on location, you need to open your eyes to what's actually there.

Planning helps you look for things you might not have otherwise noticed, but with nature, you get what you get.