Getting to know all about you 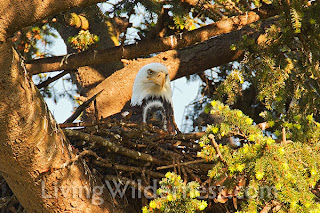 For as much time as I've spent watching this bald eagle nest, I should be on a first name basis with the owners. The eagles don't talk much, so I'll just assume their names are Eddie and Ellen.

I found out about the nest in Heritage Park in Kirkland, Wash., several months ago, long before any eaglets were born. Now the two chicks are nearly as big as their parents. One eaglet been testing his wings and could try to fly any day now; the other doesn't seem far behind.

I've photographed bald eagle nests before, but what's different is that I've really gotten to know the eagles here. I've visited the nest at least once a week. Many weeks, I've visited even more often.

Like most nature photographers, I rarely get to spend much time with my subjects. When traveling, I need to create the best images that I can as quickly as possible. If I spent months getting to know one small place far away, I would never be able to recoup my expenses.

This nest is different. It's only four freeway exits away. I can spend a few hours photographing it and still have time to get other work done.

And by really getting to know it and its residents, I've produced some of my best bald eagle images ever.

Because I've seen their flight path dozens and dozens of times, when one of the parents goes off to fish in Lake Washington, I know where to set up to get the best images of them returning with supper.

It also turns out that breakfast time for the eaglets is at about the same time every day.

Because I've been at the nest all times of the day, I know about a 45-minute window each morning when the sun shines into the nest. The rest of the day, the nest and the birds inside are in the shade and harder to photograph.

I have watched crows dive-bomb the eagles so often that I have numerous images as well as video.

And then there's the flock of Caspian terns that go fishing every morning right at sunrise.

I could go on and on, but what the experience has taught me is that I've placed too much of an emphasis on traveling far and working quickly. Regardless of the location, you can get different — and often better — images by taking the time to learn about the place.

And it's not just the knowledge that pays off. Having more time allows me to try new compositions, even if I'm not sure they will work out.

I wanted to get an image that clearly showed a fish in the eagle's talons. I set up in a place where I knew I could photograph the eagle from behind as it flew past, but I didn't know if I would also be able to see its face.

If I had only once chance to get this image, I would have probably tried a more conventional approach so that I could be guaranteed a shot. Here, if that idea didn't work out, I could always try again the next day. Or the day after that. Missing a shot isn't a big deal. I can afford to take risks here.

I can't afford to work this slowly wherever I go, but if you can slow down even just a little bit and take the time to really learn about your subject, it may pay off with truly special images.

And Eddie and Ellen say, "hello."

(I'm editing the video footage of the bald eagles and crows right now. Become a fan of my Living Wilderness page at Facebook to find out when it's posted.) 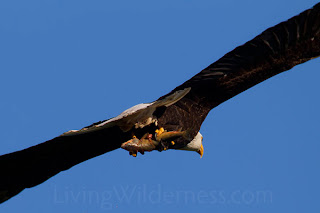