I only photograph interesting things 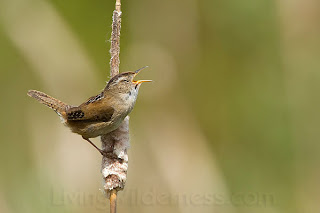 In a particularly brushy area in Seattle’s Discovery Park, I heard the unmistakable song of a winter wren. The birds were made to be heard, not seen, but I grabbed my camera and started looking for it anyway.

Moments later, a woman came up and asked what I found.

“Oh, I thought you found something interesting,” she said and then walked away.

I am just as obsessed with eagles, osprey and herons as anyone else, but I think an animal can be interesting even if it doesn’t eat others. In fact, the winter wren and its close relative the marsh wren (pictured above) are absolutely fascinating birds.

They’re the accomplished performers of the songbird family and they can really belt out a song. Despite the fact that their wingspan is shorter than a dollar bill, their songs dominate the air.

The songs are truly impressive. Rapid trills give the songs the feeling of a fine classical work at an allegro pace. And the bird is no one-hit wonder. Researchers found one marsh wren that sang 219 different songs. Most on the west coast of the United States know about 150. For some reason, those found in the East far fewer.

Like human teens, they get their musical tastes from other wrens their age. They don’t like oldies. They seem to resist learning their fathers’ songs.

And when in concert, as they are about a third of the time, there’s a deliberate order to the songs they perform. Studies found the birds that know the most songs tend to be the most particular about the order they sing them.

Hearing the marsh wren belt out a tune isn’t quite like watching a bald eagle dive for a fish. Still, it is an interesting animal. Actually, they all are. Taking the time to learn about your subjects is one of the best ways to improve your photography.

When I came across this marsh wren on Canada’s Vancouver Island, I already knew its story and I set out to create a photograph that tells it. I got a few nice shots of it flitting from cattail to cattail, but nothing that expressed what a truly accomplished singer it is.

Then, I got my frame. In the middle of one of its beautiful songs, it closed its eyes. It reminded me of a professional human singer who gets lost in the moment. Yes, I’m anthropomorphizing the wren, but I think the image tells the story of it and its songs as well as any still image can.

When students ask me what photography classes they should take to help with their nature photography, I tell them to study anything else. I’m not trying to discourage them. Rather, I truly believe that the more you know about what you photograph, the better you’re able to capture its magic.

And everything is interesting, if only you take the time to listen.

(Become a fan of Living Wilderness on Facebook to find out about new blog posts and images.)

Kevin, lovely post with great photo. Thanks for your excellence in this blog!