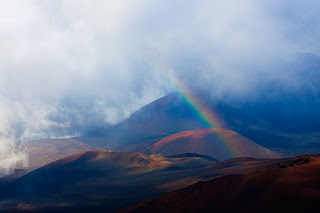 Photography is often about being in the right place at the right time. And sometimes you have to wait a long time in that right place.

This image was from my first trip to the top of Maui's Mount Haleakala. The weather was terrible. The temperature was barely above freezing. The rain was so heavy, often you couldn't even see the cinder cones in the crater. And then the lightning strikes, which, according to a park ranger, were the worst in decades.

Every now and then, however, the clouds would part just enough to let a little bit of sunshine through. Stand in just the right spot and you could see vibrant rainbows. Sometimes even double rainbows. And every so often, the dense fog in the crater would allow a glimpse of a cinder cone or two.

None of the displays lasted very long. This process repeated over and over during the two hours I sat at the rim, bundled in layers of Gore-Tex products, with my camera under an umbrella.

A few times during my marathon in the rain, other people would join me. Some took their own pictures of the rainbows. They all hurried off, and a few remarked that I was nuts to subject myself to the elements for so long. After all, I already "got the rainbow."

What they meant was that I got "a" rainbow. I didn't get the shot that I visualized, which was the rainbow and the cinder cones surrounded by the severe storm. That's what I was waiting for. That's what I eventually got.

Once in a great while, a once-in-a-lifetime photography opportunity presents itself right as you pull up to a vantage point. More often, you have to wait for your turn.